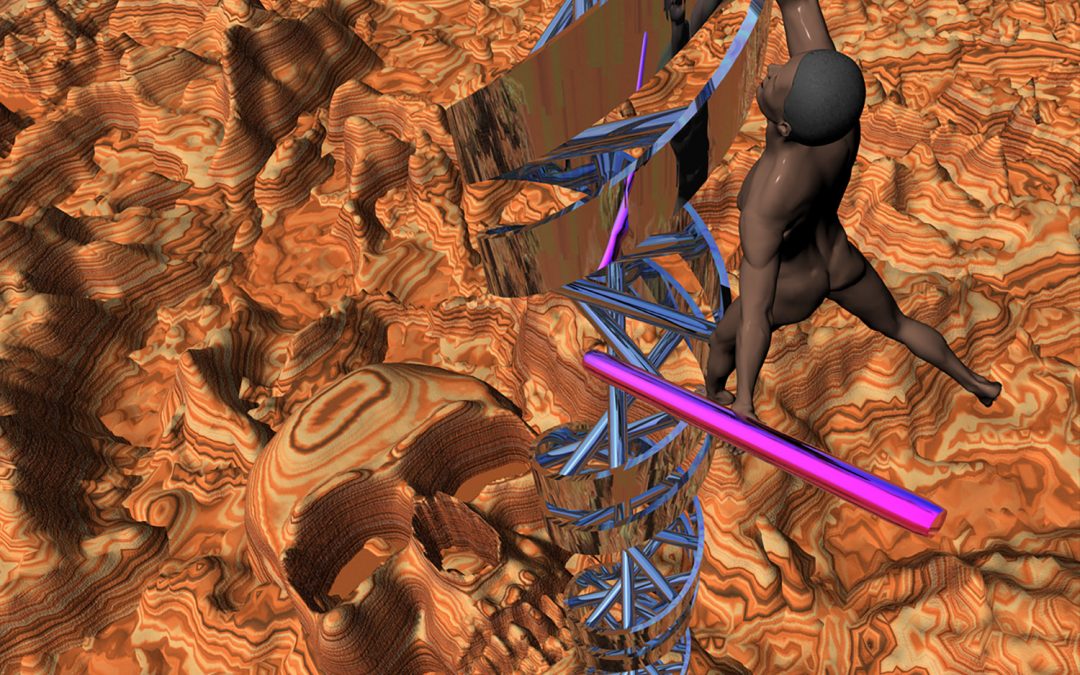 This is your new Lightning Path mantra.

Recognize the limiting Old Energy Archetypes and ideas that have been implanted in your brain. Root out until all the slimy molecules are excised from your mind. Replace old energy archetypes with the shiny and clean New Energy Archetypes of the Triumph of Spirit Archetype System (TOSAS). 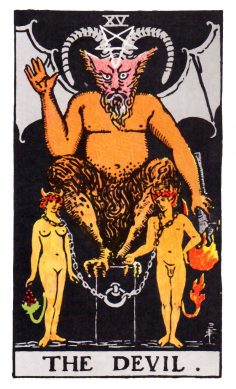 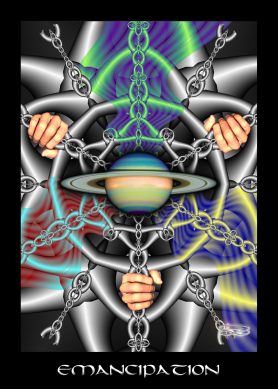 Imagine that you are raised Catholic and as part of that process, you are filled with the fear of God. You are told over and over how bad folks should be punished and sinners burned. You are told that God is wrathful and judgmental and that you had better watch out, or else. Suppose that this indoctrination was underlined by an abusive patriarchal authority figure in your home who rained fire and brimstone (screamed, yelled, and hit you) every time you messed up. Imagine just how terrified you would be of God, the Father, and authority.

Now imagine that one day you have a Connection Event. During that connection event, your consciousness expands for a brief time, lightning up the room around you. Now imagine that during that connection event, your “fear of God” is triggered. If that occurs, one of two things will happen. With fear foremost in your mind, you will either fall down into an impotent and terrified puddle of goo, or you’ll run screaming in the opposite direction. Either way, you will block Consciousness from entering your body, and block your progress forward towards healthy development, full connection, and realization of your full human potential. 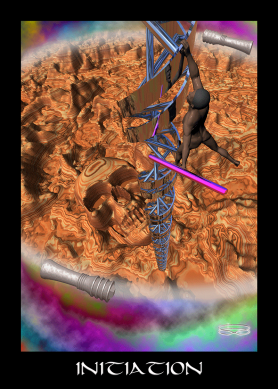 This is just one example. Many more could be provided. The bottom line is, full Consciousness cannot express through a physical unit whose mental apparatus is corrupted by wrong thought and filled with old energy archetypes because a) the archetypes themselves block consciousness from entering by creating limitations in 3D reality that block this expression, and b) misconception, fear, and other negative emotions (like guilt, shame, etc.) can, and typically will, shut down or corrupt nascent connections well before these connections are established, stable, rational, and fully grounded. With old energy archetypes in mind, you will come up short every time. Therefore, if you are serious about awakening, activation, and ascension it is critical that you do the required archetypal work which is, as already noted, to drag yourself out of the old energy archetypal muck (visually represented by the TOSAS Initiation card above) replacing old energy archetypes with the shiny new energy archetypes provided in the TOSAS, or something equivalent new energy system. Recognize, root out, and replace.

Persistent will and discipline

On the one hand, replacing old energy archetypes can be a challenge because we all are struggling against powerful socialization and indoctrination. Against that socialization and indoctrination, reprogramming requires persistent will and disciplined effort. This means if you want to drag yourself out of all the old energy archetypal sludge, you have to work with the archetypes on a daily basis until you have removed the dank tendrils of the old energy archetypal framework.  To accomplish this, your best approach is to devote consistent time every day to studying the archetypes and applying what you learn to your own life. It doesn’t have to be onerous, and you do not have to spend hours at it. You just have to be consistent and persistent. Forty-five minutes a day spread out through each day (five minutes here, ten minutes there, etc.) should be sufficient to keep you moving in the right direction. 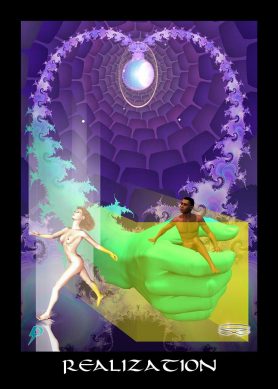 On the other hand, achieving persistent and disciplined effort can be challenging on a personal level. You might be overworked. You might be tired. Heck, as you clear old energy archetypes and replace them with the new TOSAS archetypes, you even might find yourself experiencing shame and guilt. You might experience these emotions because as you clear your thinking processes you may start to remember and realize the significance of some of the things you have done in your life. These things might not be pleasant things, and the guilt and shame invoked by your realizations may be quite painful indeed. If this happens, you might find yourself engaging in hypocrisy and self-delusion to avoid facing face certain truths and feeling ugly emotions. Rather than deal with the shame and discomfort, you hide the truth and build elaborate self-delusional structures. If you do that you will be rejecting new energy archetypes and retreating into the psychological comfort of old energy delusions. It does not matter who you think you are. It does not matter your gender, educational level, or social class background. We all have an endless capacity for self-blind hypocrisy and blatant self-delusion and this capacity is often invoked in difficult emotional, psychological, and spiritual circumstances.

Please understand, this is not meant as a judgment or degradation. In fact, quite the opposite is true. Our potential for self-delusion and hypocrisy is rooted in our powerful imagination, which is itself a part of the very nature of Consciousness. There is no reason to feel bad about that. What’s more, hypocrisy and self-delusion are natural survival responses. Guilt and shame are ugly, painful, and debilitating emotions. For obvious reasons (i.e. so you can continue to function in the world) your body and mind seek to avoid negative emotions like shame and guilt. To do that, your body will use its awesome imagination to avoid and deny. By doing this it can avoid  shame and guilt that can often lead to deep debilitation, depression and even suicidal behavior.

Of course, avoidance and hypocrisy are not psychologically or spiritually healthy. In fact, quite the opposite is true. You cannot align with your highest consciousness, you cannot embrace higher awareness, and you will; not be able to accept new energy archetypes while denying the truths of your existence. If you want to move forward, you have to avoid succumbing to self-delusion and hypocrisy and you have to face the truth.

If you do find yourself tired, exhausted, and in states of emotional/psychological denial, my advice to you is chill out, slow down, and engage in right action to resolve guilt and shame. It is not cool if you have done things to be guilty and ashamed of, but good news, you will not be cosmically judged for it either. To overcome guilt and shame and move forward, stop whatever actions are causing you guilt and shame (and get help doing that if you need to), take action to atone before you are caught out for it, cut yourself some emotional/psychological slack, and move on. Do not dwell. Do what you need to do to make it right, and then when you are satisfied the “scales” are balanced, let go, and move on.

So far I have noted that replacing old energy archetypes with new energy ones can be a challenge because we struggle against socialization and indoctrination, exhaustion, and our own guilt and shame. Yet another reason why we face a challenge replacing archetypes comes from other people around us. You may find, much to your surprise, that once you begin the work in earnest on replacing archetypes, the people who are around you will, inexplicably, start to resist you by becoming acting out and becoming hostile. Ridicule and abuse, even actual physical violence, may be used to resist your reprogramming efforts and keep you locked in old energy patterns. If you do experience resistance from others, ask them politely to stop. If that does not work, create boundaries and expectations.[3] If they ignore your boundaries and continue with their assaults, you may have to consider removing them from your life sphere. If you do not want to remove them, or if you find this is a challenge, seek professional guidance and assistance.

[3] Note, the importance of boundaries and safe places is discussed at the “awakening” level of the LP curriculum, in particular, the first three LP Workbooks. See http://www.lightningpath.org/awaken.

The bottom line is, full Consciousness cannot express through a physical unit whose mental apparatus is corrupted by wrong thought and filled with old energy archetypes because a) the archetypes themselves block consciousness from entering by creating limitations in 3D reality that block this expression, and b) misconception, fear, and other negative emotions (like guilt, shame, etc.) can, and typically will, shut down or corrupt nascent connections well before these connections are established, stable, rational, and fully grounded. I totally agree, and I’d like to add c) because when full consciousness enters the physical unit all conditioning will receive a… Read more »