Murdering the Mi’kmaq for Canada 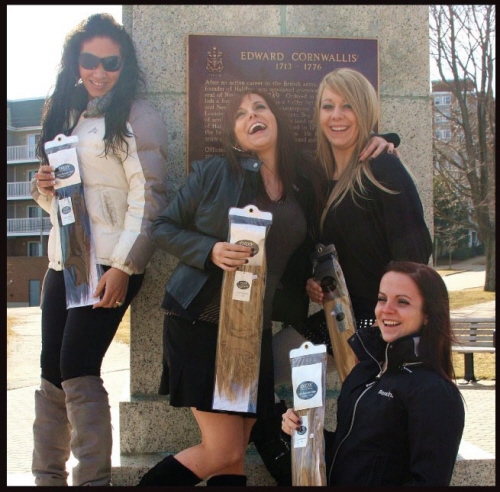 I am currently working on a revision to my Canadian studies sociology course, specifically a unit on racism. In the unit, I am including some information on Edward Cornwallis, an English aristocrat who came to Canada to help expand the British colony. He is an interesting historical figure because, in 1749 in what is now known as Halifax, he issued the following terrorist proclamation.

…we…do hereby authorize and command all Officers Civil and Military, and all His Majesty’s Subjects or others to annoy, distress, take or destroy the Savage commonly called Micmac, wherever they are found, and…do promise a reward of ten Guineas for every Indian Micmac taken or killed, to be paid upon producing such Savage taken or his scalp … 1if killed to the Officer Commanding. Edward Cornwallis (Paul 2019a)

This terrorist proclamation, along with two others like it, became known as the “Scalp Proclamations” (Paul n.d.). These proclamations initiated and supported the genocidal removal of the Mi’kmaq from their ancestral hunting grounds. As Cornwallis himself noted, he wanted to use some “effectual methods” to “pursue them to their haunts” (i.e. their homes) and “show them” that “they shall not be secure within the Province.” He also wanted them dead and, knowing it was hard to haul around severed heads, offered a ten Guinea reward for the scalp of dead Mi’kmaq citizens.

As the Canadian Encyclopedia online notes, “It is not known how many people died, but several reports detail attacks on Mi’kmaq villages and mercenaries bringing in dozens of scalps to claim bounties.” 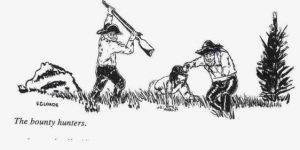 If you were an artist, you could paint a horrifying picture of this kind of thing. Just visualize an English mob descending on the Mi’kmaq in their homes, scalping knives at the ready.

If you were a musician, you could write a pretty good song about this kind of thing too, like the band Iron Maiden did back in the 80s with their song “Run to the Hills”. If you are interested, you can listen to the song and follow along with the lyrics.

So, why would Cornwallis do such a thing? Why did he bring the full weight of the British Empire down upon the heads of the Mi’kmaq? Why did he initiate a brutal reign of terror. Putting aside his obvious psychopathy, he did it because he was tasked with building a new settlement, now Halifax. He wanted to make Halifax great, so to speak, but he did not want to negotiate with the “savages.” Instead, he issued a law, still on the books as of 2018 (Roache 2018), that made it legal and profitable for the British citizenry to murder the Mi’kmaq.

I know it happened a long time ago, and I know personally I had nothing to do with it. Consequently, I don’t feel guilty about this; however, I am still horrified by the actions of my white European ancestors. I am also kinda shocked by how ignorant of basic history some people, likethe owner of Hairdressers’ Market Inc. in Halifax, can be. In 2010, in a breathtaking display tone-deaf historical ignorance, this  company ran an advertisement for hair products that showed laughing female models holding hair extensions in front of a memorial to the murderous Mr. Cornwallis. 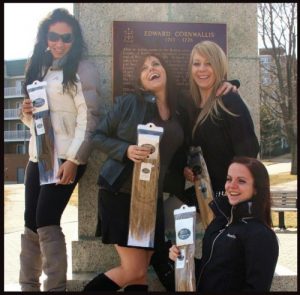 The owner certainly didn’t do this on purpose. Let us give him that. As he said at the time, he simply had no idea (Paul 2019a). Indeed, he was surprised by it himself. As he said when confronted, ” Who would suspect? It’s a public park. If there’s such an offensive connection to it, why’s it there? Why aren’t there warning signs on it?” (Paul 2019a; Tattrie 2010)

Why indeed aren’t their warning signs.

The problem, I suppose, is that this part of our history is not often exposed. Children are not taught this history in schools. If you are rich enough to acquire a post-secondary education, you can learn it in the so-called “liberal” schools, but the current cadre of authoritarian elites who are trying to take over the world don’t even like that. They call it a “liberal ideological agenda” and tell us to move along because there is nothing to see here. But, there is something to see, not because I think we should feel guilty, but because it happened and it was horrible and if we want to honour or collective human heritage, we should acknowledge and make amends and never, ever, do it again. 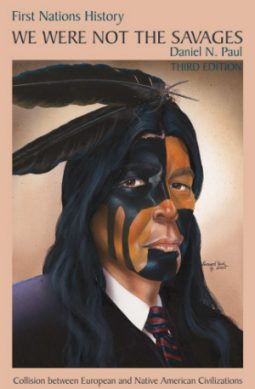 ———. n.d. “The Hidden History of the Americas.” We Were Not the Savages. Accessed March 7, 2020b. http://www.danielnpaul.com/AmericanIndianGenocide.html.

1The ellipses refer to the removal of the phrase “(as is the custom of America)”. I chose to remove this phrase because it is often used to suggest that the scalp taking practices were in fact part of native American traditions. Daniel Paul makes clear that this is not an [sic] reference to an American Indian custom, but to a custom founded by the British in British North America. It was initiated by them for the purpose of terrorizing into submission, or exterminating, American Indian Tribes that were fighting to save their way of life and homelands from destruction by the merciless invaders.” For more, see www.danielnpaul.com/BritishScalpBounties.html