[email protected]
0 Items
Menu
Forum Navigation
ForumActivity
Forum breadcrumbs - You are here:ForumStudent Forums: News and AnnouncementPhysiology and Neurology of the F …
You need to register and login to create and read (some) posts

Physiology and Neurology of the Five Sheaths (Koshas)

In Vedic spirituality, in the taittiriyo Upanishad, written about 6th century BC, there is the notion that your physical being consists of five koshas.

The Sanskrit word Kosha is sometimes translated as “body,” but it means pail, bucket, sheath, or simply container. According to the taittiriyo Upanishad, your body is made of five koshas or five containers.

The annamaya kosha is the physical container, or food sheath. This is the physical body of flesh, fluid, and bone. In the upanishad, it is called the food sheath because it develops from the energy provided by food, and also because, when it is dead, it becomes food for other living beings.

Finally, there is the anandamaya kosha, or bliss container. This is that aspect of your physical being where you purportedly experience connection and the pure bliss of higher Consciousness.

In the taittiriyopanishad, the five sheaths are said to fit one inside another, like a Russian stacking doll. Inside all of them is the atman, higher Self, or soul. 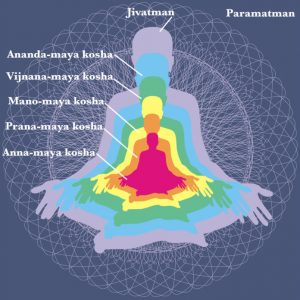 This Vedic view of the five koshas is interesting, and rings true to a lot of people, and for good reason. Despite the age of the concepts, the koshas map quite closely to what a modern scientist might say about the Physical Unit.

For example, the food kosha is obviously the physical body as a lump of inanimate flesh and bone.

The energy kosha also maps. The energy kosha is the prana sheath, the “breath of life sheath” or just the “life” sheath. The life sheath represents the electrical, chemical, neurological and metabolic life functions of the physical body; not the actual cells, but the metabolic forces that get it moving along.

Once again, the mind functions of the body are contained by the previous koshas. Without the body, there is no metabolic life functions, and no brain neurology. Similarly, without neurology, there can be no mind functions. Each layer fits in and is contained in and enabled by the layer that comes before, just like the Upanishad says.

Next up is the vijnamaya kosha, or the discriminating mind. At this point you can probably anticipate that this kosha maps directly to the cerebral cortex. It is in the cerebral cortex, that we find our discernment and information processing abilities, exactly as suggested by the ancient Upanishad. Of course, as with the previous koshas, the neocortex is made possible the lower brain, the CNS, the body’s metabolism, and the body itself.

Finally, there is the bliss kosha or bliss sheath. Modern neuroscience and psychology has no awareness of what this might be, though given how accurate and well thought out the original koshas are, and how often the concept of bliss appears in Vedic, Islamic, and Christian spiritualities, it is reasonable to speculate that the body does have some kind of bliss response, and that this kosha might actually exist. Though what it might be is, at this point, anybody’s guess, though I’m thinking it may be the body’s endocannabanoid system.

So there you have it. A modern mapping of ancient Vedic wisdom.

Before closing up, a few final comments are in order.

Number one, it is interesting to see how well these ancient Vedic concepts map to modern medical science. As long as you see beyond the pre-medical modelling, it is a one-to-one correspondence. Without the benefit of modern medicine, Vedic thinkers correctly identified and demarcated the biological, neurological, and mental systems of the physical unit in a way that would be familiar to a modern neurologist. They erred only in extending the analogy with the body too far, in thinking that their observations meant the physical unit consisted of five separate bodies, and not five separate biological systems. If the Vedic thinkers who put this together had access to modern neuroscience, I think they would have said the same thing, but conceived of it slightly differently, as I have.

Number two, we can see the deep wisdom of understanding the biological systems in terms of layers or containers. Each “container,” each system, contains the next and as a consequence, each system, starting with the physical unit and ending with the bliss functions, must be healthy and properly “aligned” for the physical unit to work as a proper container for the Atman, or the soul, inside. If you want your body to properly contain the Atman, you must keep all systems of the body, all koshas, all containers, healthy and operational. Once all the other bodily systems are active, healthy, and aligned, the bliss kosha is activated and the atman/soul inside is able to situate and shine forth.

So what are the takeaways here? Number one, if you want to activate your “bliss sheath,” take the advice of the ancient vedic thinkers and pay attention to your entire physical and mental being, to all five koshas. Your body, your brain, your mind, and your thinking capacities all have to be healthy and aligned for everything to work as designed. Number two, if you are interested in ancient literature especially of the spiritual kind, you need to use your critical thinking skills. You can’t dismiss them outright, because apparently they contain spiritual wisdom; but, neither can you approach them without using the functionality provided by your vijnanmaya kosha, your critical neocortex brain. You cannot be afraid to engage with, update, and modernize the text you approach. If you engage, update, and modernize, you generate understanding and respect. If you don’t, you sow confusion and disrespect. Frankly, the last thing this world needs right now is more confusion and more disrespect.

Additional content is available to LP members only. To get the full message, become a member, register and login.
Login
Back to Login | Register
Click for thumbs down.0Click for thumbs up.0
#1
RSS Feed

Cancel culture, the “Twitter mob” …by Michael.S6 days ago

Cancel culture, the “Twitter mob” …by Michael.S6 days ago

Scientific evidence for the LP co …by Michael.S3 weeks ago

Fixing the holes in the water gla …by Aim4 weeks ago

Fixing the holes in the water gla …by Liz4 weeks ago

Fixing the holes in the water gla …by Aim4 weeks ago