by Michael.S | Mike's Blog, Student Only

“Bill and Ted’s Excellent Adventure is a movie” with a new energy message of peace, understanding, and connection. 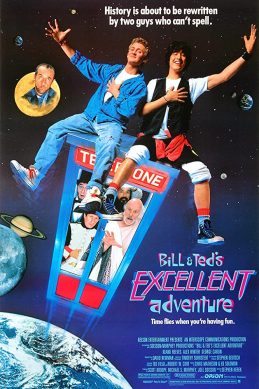 Bill and Ted’s Excellent Adventure (1989) is a goofy comedy about two high school slackers who, as it turns out, are the saviours of the entire world. The short of the story is that before they can save the world, they have to pass their high-school history course. They only have one night to absorb the materials of an entire high school semester, so it seems like they will fail and the world will be doomed. Thankfully, however, a time traveler from the future visits them and gives them access to a  phone-booth time machine (Tardis, anyone) that can take them anywhere in history they choose to go. Through a series of misadventures, they learn enough about history to pass their course, after which they start a band and save the world.

I watched this show again last night after almost thirty years because a third movie is being released this week and I wanted to update myself and the family before watching the third installment. After watching the movie, I was surprised. What was surprising about this movie is that it gives a New Energy alternative to the Old Energy Archetype Constellations that dominant in pop-culture offerings. True, the saviours in this movie are white and male; however, instead of teaching that utopia/heaven is arrived at through violent conflict between the forces of good and evil ( which are key themes in the Zoroastrian Frame that dominates this planet’s culture) this movie teaches the new energy view that utopia is achieved via the dissemination of messages of understanding, unity,  peace connection, and, I might add, healing.

All in all, a most excellent and entertaining movie.