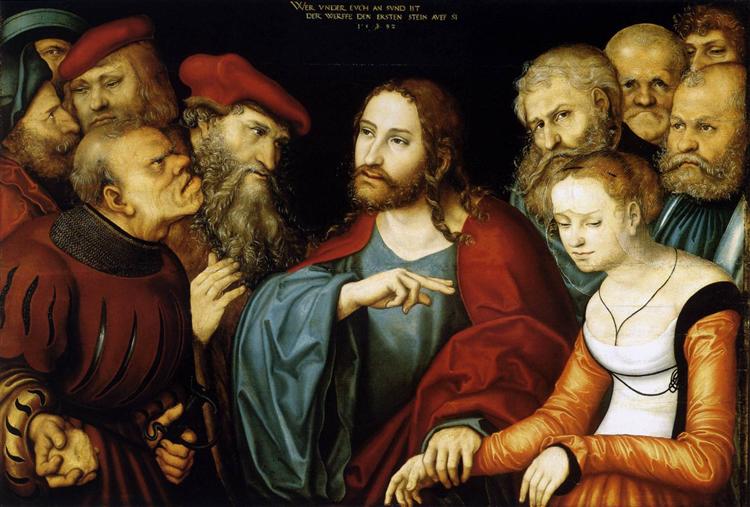 Right-wing elites often use the bible to justify their beliefs and actions. However, in many cases, their reading, if they actually read it at all, is selective and misinformed. The example in this article demonstrates how elites misread, misappropriate, and weaponize the spiritual teachings of this world to suit their own economic and political agendas.

I recently noticed some conservative Republican apparatchik using a passage from a bible story to slam democrats and progressives. It was the “Jesus Delivers the Adulterous Woman” story, found here in several versions. As this person tells the story, a mob of people had gathered to stone a woman. Seeing this, Jesus said, “he that is without sin among you, let him cast the first stone.” After saying this, the mob of people file away. The apparatchik then goes on to say that “if Jesus pulled that on Twitter, the mob would stone her then dox Jesus and get him fired from the Galilee Costco.”

You see what he did there? He weaponized a bible story to attack democrats and progressives. He suggested, supported by his peculiar presentation of the story, that the progressive “Twitter mob” were not like Jesus at all–they were unforgiving, rigid, unreasonable, and fanatical. They would see Jesus defending a sinner and they would go mad as a result.

This peculiar presentation of the story would ironic, even funny, I suppose, except that this fellow clearly did not read the passage he was weaponizing. If he had, he would have realized that the story he was using applied more to the behaviour of violent, patriarchal elites than it did to some mythical, irrational mob.

What’s really happening in this passage is that Jesus is attacking elite privilege and power. Jesus is there to teach the people who have shown up to peacefully hear his deep spiritual wisdom. The local elites ( the “teachers of the law and the Pharisees”) arrive not because they wanted to hear Jesus teach, but because they wanted to “trap” him. They wanted to “have a basis for accusing him” so they could arrest him and throw him in jail. In order to do this, they “brought in a woman caught in adultery….” and asked Jesus if he would follow the law and recommend that she be stoned to death. They knew what Jesus was like. He tended to side with the underdog. They figured that if they could catch him advising something unlawful, specifically that the woman shouldn’t be punished even though she was a sinful adulteress, then they would have a basis for his arrest.

Unfortunately for the clods who showed up to trap Jesus, he knew they were trying to trap him. Instead of responding in a way that would self-incriminate, he skillfully pushed it back on the elites by saying to them and not the mob, “Let any one of you who is without sin be the first to throw a stone at her.” With this brilliant statement, he referenced the elites own “sins,” got them to think of their own hypocrisy, invoked disjuncture, thereby silencing them and sending them away in quiet shame. You can read the full story and judge for yourself.

If you read the above story, you’ll see, Jesus is not pointing a finger at a restless “cancel culture” mob, as the apparatchik suggested. He is also not forgiving racism, sexism, or homophobia, as this republican operative had implied. Instead, he is sparring with local political and economic elites who are trying to trap him and have him arrested by asking him to apply sexist and misogynist laws. In this context, Jesus is the model for Twitter “mob.” Jesus is in fact rejecting, i.e., cancelling, authoritarian and elite laws and the gender oppressions which they support. He is encouraging a more egalitarian, less violent, perspective. If you read the story I am sure you will see, this is the correct interpretation. Resistance to power, patriarchy, and authority is the moral of the story. The Republican apparatchik could only make his claims because, clearly, he did not read the whole story.

This bible story is fascinating from both a sociological and psychological perspective. It shows Jesus directly confronting sexism and violent relations of power. It also portrays Jesus as a progressive social actor coming up against regressive political and economic forces bent on removing his influence from society. It also highlights a question: why are the elites out to get Jesus? According to the New Testament, he was sent by God to teach the people. Why did the elites want to trap him with legal trickery? Why did they want to arrest him?

The answer, if you are interested, can be found in the article “Rethinking the Origins and Purpose of Religion: Jesus, Constantine, and the Containment of Global Revolution.” It is simple though. Jesus was an anti-authoritarian revolutionary who wanted to usher in a utopia for all people, not just for the “chosen few,” but for women, children, the poor, and all those thrown in jail by an unjust and exploitative system.

The Spirit of the Lord is on me, because he has anointed me to proclaim good news to the poor. He has sent me to proclaim freedom for the prisoners and recovery of sight for the blind[folded], to set the oppressed free…. Luke 4: 18.

As such, he was a threat to the elites and their system of political and economic exploitation. They wanted, they needed, to stop that threat. They couldn’t just have him arrested because he was too popular amongst the people; instead, they invoked the law, tradition, and violence in an attempt to create conditions where they could throw him in jail. Of course, it didn’t work, this time. In this story, Jesus gets the better of them. Unfortunately, we all know how the story ends. Eventually, the elites do succeed in arresting and executing Jesus, but that’s a story which for another time.

I should point out, in closing, that this little vignette highlights a rather important fact about how people interact with spiritual teaching and spiritual texts, and that is, they often misappropriate them. They have their own agenda and their own bias and they often look into the Bible, or the Koran, or whatever, and selectively interpret what they find. They use various rhetorical devices to do this. They take quotes out of context; they spin the truth in a direction favourable to their economic interests, Sometimes, they don’t even look at the text at all, they just take some idea they have and paint it over the text. As a sociologist, this is no surprise. Sociologists understand that social class, gender, ethnicity, and other social facts often impact how we see the world. Sometimes, if we’re not careful, these social positions can unduly impact our view of truth and reality. They can lead us into the temptation of twisting the truth to serve our own agenda. You see this quite clearly in this instance, and it happens all the time.

I should note, this does not mean there is no such thing as “truth,” or that we cannot look at a text, a sacred book, or whatever, and discover what is really in there to find. The messages contained in the story of Jesus and the adultress are there for all to see, and I think once people read the full extract with a receptive mind, these messages, which do not support the conservative agenda, become pretty clear. Jesus was fighting authority. Jesus was rejecting (canceling) judgment and punishment of the adulteress. Jesus was trying to protect himself from deceptive political attack.