I have a lot of respect for Abraham Maslow. In 1943 he came up with the “hierarchy of needs.” This hierarchy of needs initially provided the foundation for a theory of human motivation that saw human behaviour as motivated by a series of needs, from lower physiological needs to higher needs for self-actualization and transcendence. The hierarchy is typically represented by a pyramid of needs; however, for reasons outlined in the article “Eupsychian Theory: Reclaiming Maslow and Rejecting The Pyramid The Seven Essential Needs,” we prefer to represent the human needs identified by Maslow as a Circle of Seven Essential Needs. 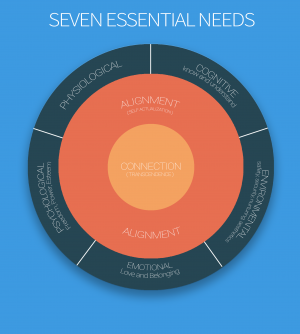 The circle of essential needs was not the end of Maslow’s thinking, it was really only the beginning. Later on, as his thinking matured, he began to develop a Eupsychian Theory. A Eupsychian Theory is a theory of a “good society” and the “good person.” He didn’t finish his project because he died of a heart attack before he could, but the foundations of the theory are certainly there, if you look carefully (Sosteric & Ratkovic, 2020). The theory itself is fairly simple and contains really only three propositions.

One, if you want to make good humans, you have to create a good society.

Two, if you want to create a good society, make sure the society meets all our human needs.

Three, sick humans, evil humans, are created by societies that fail to meet all our essential human needs (Sosteric & Ratkovic, 2020). As he noted, psychopathology and “evil” results from the frustration, corruption, or violent suppression of our essential needs (A. H. Maslow, 1970, p. 1969).

Maslow was very clear about these things and he said them in several locations.

“In our society the thwarting of these needs is the most commonly found core in cases of maladjustment and more severe psychopathology ” (A. H. Maslow, 1943, pp. 381–383).

“Destructiveness, sadism, cruelty, malice, etc., seem so far to be not intrinsic but rather they seem to be violent reactions against frustration of our intrinsic needs, emotions and capacities” (A. H. Maslow, 1968, p. 3).

“We do know, however, that out of the search for fulfillment of a basic need-take love in the child for example-can come evil. The child, wanting his mother’s exclusive love, may bash his little brother over the head in hopes of getting more of it. What we call evil or pathological may certainly arise from, or replace, something good. Another example is the little squabbles among children; all the fighting they do about who should do what, about dividing up the chores, ultimately can be seen as a distorted expression of a very powerful need fairness and justice” (A. Maslow, 1961, p. 8).

Maslow clearly had a good sense that toxic societies created toxic people and that if we wanted to create healthy, fully developed people, we needed to create healthy societies, which is why I find his eugenicist positions rather puzzling. In journal entries (A. Maslow, 1982) which he knew he had to keep secret for fear of the backlash should he publish them, he repeatedly referred to something he called the aggridant, a term he used to describe chickens that were bigger, stronger, and more dominant. For Maslow, the aggridant was a superior chicken person with strong genetics, driven to achieve things. An example of an aggridant in human form might be Elon Musk or Jeff Bezos. Maslow compared the aggridant to the weak person and suggested that if human beings wanted to evolve, eventually society would have to develop Eugenicist policies to weed out the weaker genes and encourage aggridant development and aggridant leadership.

Putting aside the rather questionable attribution of aggridant status to people whose status derives from the sociopathic exploitation of the working classes (Ronson, 2011) in the service of the addictive accumulation of wealth (Sosteric, 2018), and the fact that it is aggridant who are impoverishing billions and who have led us to the brink of ecological catastrophe, the whole idea of seems rather bizarre, especially considering it was this guy who founded both Humanistic and Transpersonal psychologies. How can you support eugenicist policies at the same time that you realize that environment plays a critical role in human health, well-being, and development? Put another way, why focus on and blame the individual when clearly it is society that is at fault. For me, and most sociologists I suspect, the implications are clear. If you want to grow healthy, well adjusted “good” individuals, meet all their needs. It’s just like growing a flower. If you stunt the flower by failing to water it properly or by planting it in shitty soil, it’s not the flower’s fault if it grows up weak and spindly, it’s the gardener’s fault. It just doesn’t make any sense to blame the individual plant.

At this point, I have to say, I got a question; specifically, what on Earth would lead Maslow to ignore the implications of his own theory and support Eugenicist policies? The answer, I suspect, is probably a complex combination of ideology, influence, and the use and misuse of science in the service of a Capitalist hegemony. I think its best if we let an interested historian sort that out. I do know one thing though; Maslow was a fascinating character full of brilliant and useful insight but subject to erroneous thinking, questionable ethics, and irrational prejudice, just like a lot of people.

What should we make of all this. Personally, I find a lot of value in most of Maslow’s ideas. I also think that given Maslow’s history as a progressive academic with socialist tendencies, he would have eventually put aside his horrible thinking and come to the proper conclusion, which was that if we wanted to create a better human, we needed to create a better society. Unfortunately, he died six months after committing his “cold blooded” thinking to paper, so I guess we’ll never know for sure.

Maslow, A. H. (1968). Towards a Psychology of Being (2nd Edition). Van Nostrand Reinhold Company.

Ronson, J. (2011). The Psychopath Test: A Journey Through the Madness Industry. Picador. https://amzn.to/2SEwVLp

Sosteric, M. (2018). How money is destroying the world. The Conversation. https://theconversation.com/how-money-is-destroying-the-world-96517