by Michael.S | Basic Lessons, Student Only 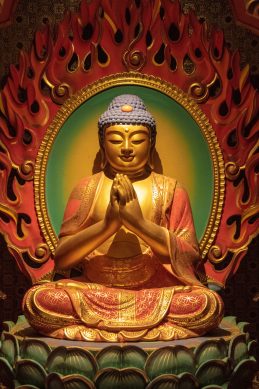 Photo by Nick Fewings on Unsplash. The fire behind the Buddha represents the fire of Consciousness, from which we all emerge.

What is enlightenment? Enlightenment is basically the realization of a truth, particularly and especially when that truth is sourced internally, via a Connection to your Highest Self (HS).

Pause and think about that for a moment.

It is important to understand that enlightenment is not just about realizing a truth. Enlightenment is also and equally about you listening and being open to the truths conveyed by your connection. If you are not open to hearing the truth, then it does not matter how strong your connection is, or how loud your Highest Self might be talking at you. If you are not open to hearing the truth, if you are blocked up in some way, nothing is going to change. If your mind is closed, you will stay stuck in the mud and muck of Maya until the day you die.

When you think about it, enlightenment is really just learning something. Enlightenment is just like going to a school and listening to a teacher or a professor. If you attend university and go listen to a nuclear physics professor’s lessons, you will slowly become “enlightened” with regards to nuclear physics. The same thing applies elsewhere. If you go listen to a psychologist, you will slowly become enlightened with regard to psychological things. The only difference is that in the case of spiritual “enlightenment,” you are listening to and learning from your own HS.

If that is the case, if enlightenment is really just learning, why call a truth realized internally via a connection to your HS enlightenment, and not just learning? For no compelling reason really, except, that the lessons and learning that come when you connect to your HS often feel more significant, more important, and more meaningful than the type of learning you do when you sit in a classroom or read a book. When you gain insight from an internal connection, when you  gain information by “going within,” the information often comes with an emotional and psychological “oomph.” Sometimes the “oomph” is small, like a feeling of being blessed, and sometimes its an oomph of truly cosmic proportions. When it feels cosmic, people have a tendency to use big words, like “enlightenment,” “gnosis,” “satori,” “transcendence,” and so on, to try and describe the grandeur of the experience. But really, no matter how dramatic it may feel, it is just learning from your Highest Self.

As you can see, enlightenment is pretty straight forward. Enlightenment is simply the learning you do when you connect with and communicate with your Highest Self. We talk about how to get started on the path to connection and communication in the book The Great Awakening, and also in Lightning Path Workbook One: The Basics. For this lesson,  it is important to simply understand two things.

Number two, understand, enlightenment is not a one-time-only affair. Enlightenment, like learning, is not something that happens just once or twice, no matter how powerful the “lesson” might feel to you. Enlightenment, like all forms of learning, is ongoing. This means there is no such thing as “total enlightenment.” This also means there is no endpoint where you can claim ultimate knowledge about everything. If you practice connection long enough, you might become an expert at something, and you might even qualify to be a teacher, but just like going to one or two lessons does not make you a qualified psychologist or a capable nuclear physicist, a couple of Connection Experiences, even a dozen, does not qualify you as a spiritual expert and it certainly does not qualify you to teach. Anybody who claims otherwise is either a fool, or a liar, or both.

Remember, enlightenment is simply the learning you do when you connect with and communicate with your Highest Self. Also remember, enlightenment is something that is ongoing. You can become “enlightened,” that is, you can learn more things from your HS, whenever you sit down and make a good connection to your highest self. If you want to become enlightened, you have to practice connection persistently and consistently, every day, or at least a few times a week.