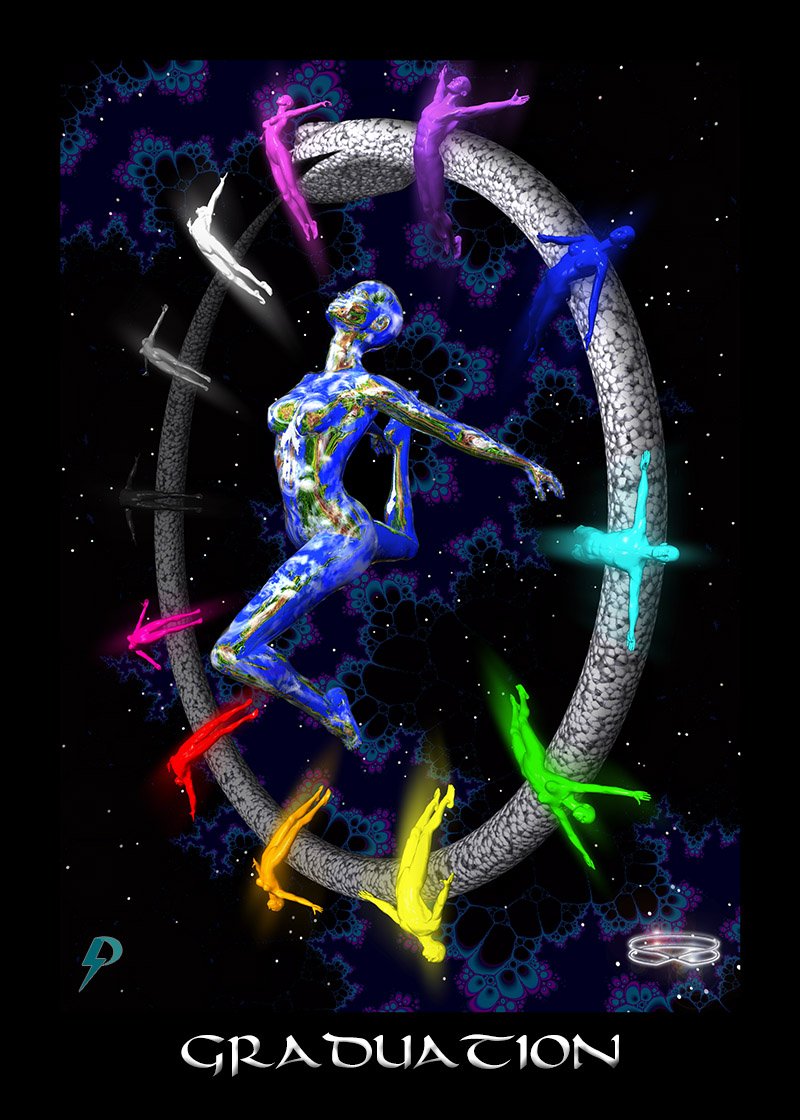 Symbolism: The twelve figures represent the sum total of human life and planetary variation. These are the twelve signs of the zodiac and the rainbow spectrum of humanity. The figure in the center is the planet Gaia. The snake ouroboros is the Creation Template driving the endless ascent of creation, now finally complete on this Earth. A cosmic evolutionary dance with all life joining in. Gestation complete. Chrysalis transformation accomplished. The Body evolved and fully connected. Bondage broken. Humanity united. This is a graduation celebration. Vulnerable and exposed, but safe all the same, a world contact jubilation welcomes us home.

Narrative: This archetype represents The Great Work complete, and the graduation and associated celebration. Having responded to the call and reclaim joyful mastery, having emancipated and aligned, we activate and are reborn. Taking our power, we victoriously shine our bright star. Consequently, darkness is swept away as the planet rapidly transforms.

At the highest and most aligned levels, we celebrate the culmination of human evolution and the fulfillment of the Divine Plan. United as one across the globe, we joyfully embrace a cosmic unity. A celebratory milestone welcomes us home, but this is not the end of our journey. This is merely the beginning of utopia. The ascent of the universe is an eternal voyage. Through the eternal hallways of creation, we build a galactic star nation.

At mundane levels, this is graduation and commencement. We have worked hard and sacrificed much. We have victoriously achieved the goal we have set for ourselves, so celebrations are in order. Don’t rest too long however, for more work needs to be done.

Divination: Present in a reading or assessment, this archetype points our attention at our society, our nations, and the hold world. You do not have to love everybody, but nobody is excluded from the celebration. We need the skills and talents from the entire rainbow spectrum to complete the planet’s assession.

Blockage and challenge: Negatively aligned, this archetype represents disappointment and failure. You have done some work, but as you look around you realize this is not what you sacrificed for, and nothing like you were promised. Confused and lost, you wander and wonder if it has all been a big, deceptive, lie.1 Negative alignments indicate internal and external resistances harsh-felt failure, rejection, exclusion, and extremely toxic social and work relationships. The cascading consequences of ubiquitous toxicity finally overwhelm the body. Emotional, psychological, and finally physical collapse ensues. General systemic collapse is the unfortunate result of failure to make the correct turn. In extreme negative aspect, this is a reversal of the promise. Hatred, debilitation, debacle, holocaust, and mass death are the unfortunate result.

Healing and connection message: The idea of the end can be fearsome and frightening for some, and it should be. The choice of the path and the choices you make along the way lead to an inevitable outcome, good or bad. In other words, not all paths lead you victoriously back home. This realization can bring a brutal reality crashing down with gut-wrenching shock. The truth is, at the end of the road, you inevitably face the consequences of your good and bad choices. However, you can change the path and change the consequences by simply making a New Energy choice. Understand, there is neither punishment nor eternal damnation. There is no reason to sigh. There is no reason to die. In the new energy, mistakes are met with education and gentle support. Simply atone and try once again.

The power and importance of archetypes - The Lightning Path

[…] empower us to transform the world, or they can enslave us to the conditions of our life. They can unify us in common purpose, or they can divide us and make us feel small. Because archetypes are […]