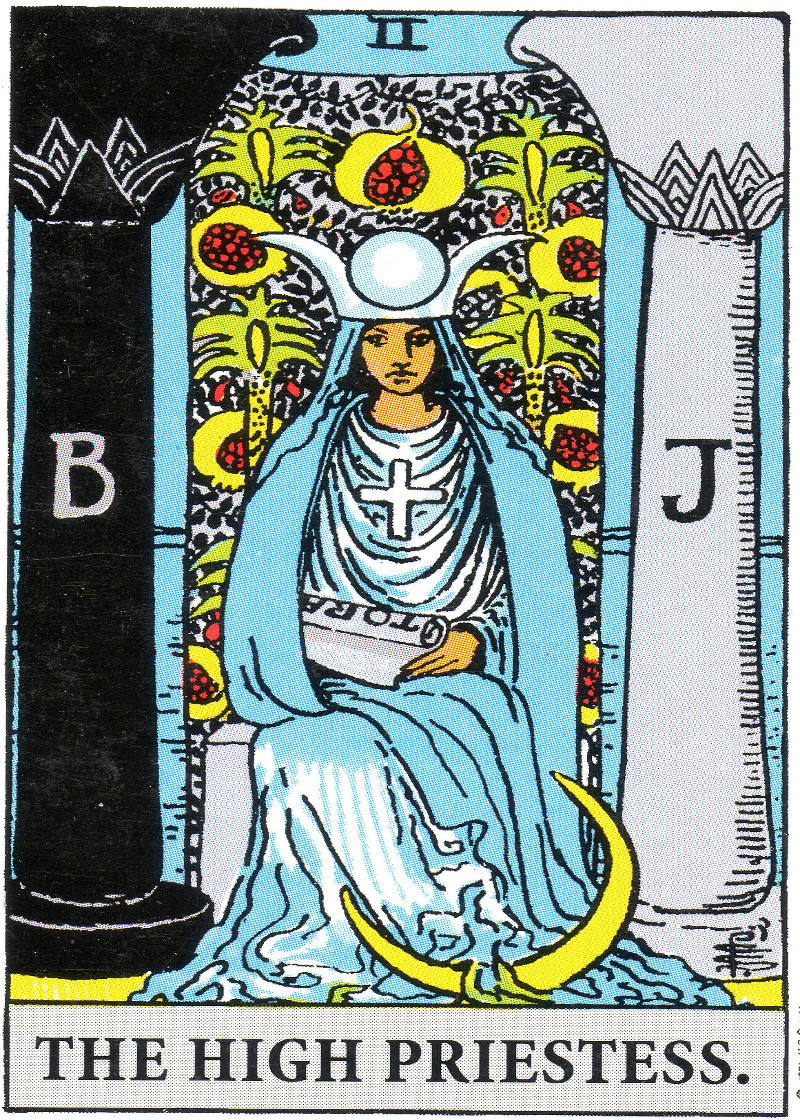 Key Phrase: The superiority of the male yang/force. The acceptance of good and evil.

Symbolism. This card shows a female between two pillars labelled “B” for Boaz (strength) and “J” for Jachin (establishes). As Freemasons point out, these are the names of the two pillars at the entrance of Solomon’s temple. Behind the “High Priestess”  is the sea of higher Consciousness or higher attainment, blocked by a thin veil. On her lap is a book of rules you must follow before you are allowed to peak through the Veil to see what’s on the other side. Her dress flows like water and symbolizes the consciousness of your awakening mind.

Narrative: The message of the old energy archetype is simple. You need to accept the fact that there is good and evil in the world. You need to accept that duality exists in the universe. You need to accept this duality as required and essential. As one commentator points out, “The black and white colours of the pillars symbolise duality – masculine and feminine, darkness and light – stating that knowledge and acceptance of duality are required to enter this sacred space.” As one masonic commentator notes, ” it is generally accepted that the Jachin and Boaz represent the equilibrium between two opposite forces.” The message is clear. You must accept this duality. You must accept this is the way of all things. The cosmos, you are told, manifests as a consequence of the interplay of opposite forces. God needs the devil to exist, or so they will say.”The movement between opposites is the basic rhythm of the material world. Nothing exists absolutely in nature. In the words of Ursula Le Guin, ‘Light is the left hand of darkness and darkness the right hand of light.’ When we move from the two principles to the Empress we are seeing the opposites mingle together in nature to produce the reality of the physical universe.” (Pollack 1980, 43)

Before you are allowed to move forward and pierce The Veil, you must accept this basic truth. As Papus indicates:

This is the picture of Isis, of Nature, whose veil must not be raised before the profane. The book indicates that the doctrines of Isis are hidden; but she divulges to the magi the secrets of the true Kabbalah, and of occult science.  (Papus, 1978).

Note that in older old energy narratives the High Priestess archetype is sometimes used to defame and devalue the female form. This devaluation is rare these days, but you can still find it in the most regressive centers of power. 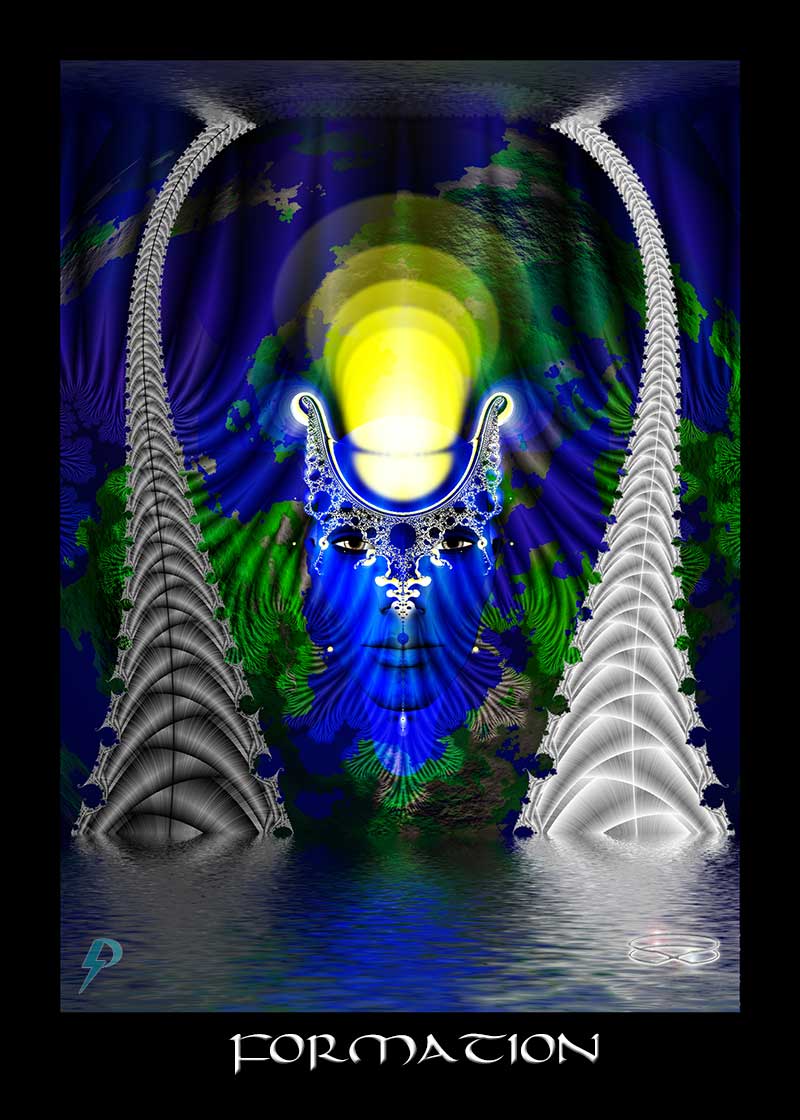 Symbolism: A human face sits betwixt the pillars of force and formation (also known as yang and yin). The sun  of higher Consciousness, perhaps the Son that is your Highest Self,  shines fully and brightly in mind (Isis’ Cup). Behind the face is the Earth, symbolizing physical creation. Physical creation floats in and is formed by the waters of Consciousness.

In the  new energy, Formation/Yin (represented by the darker pillar) works in balance with Force/Yang (the lighter pillar) to manifest creative intent. This is the way it should be, for as noted in the Book of Life,  balanced use of energy manifests health, well being, and longevity. Balanced creation leads to calm joyful, creation. Force and formation in balance allows for the full expression of the Divine that lies within.

This new energy archetype card reminds us of the power and significance of ideas and archetypes. Through the formative power of ideas, we shape and direct the willful force of our energy and power. At the highest and most aligned levels, this archetype represents our creative desire, ambition, and the intent of our Highest Self, formalized into archetypes that direct the flows of creation. This is how creation proceeds. This archetype also represents  individual and collective Creation Template.

Note that in the new energy the pillars and energies are not characterized as antagonistic or opposing. The goal here isn’t to sit and accept (Book of Slavery) or control (Book of Power) the imaginary forces of light and dark. The goal is to use these two important Aspects of Consciousness, force and formation, to manifest physical creation. Therefore remember, in the new energies, force and formation are not opposition and antagonistic. In the new energies, these aspects  work together to allow Consciousness to create the universe.

Getting into the New Energy

In the new energy, force and formation are stripped of masonic connotations and emptied of their gender significance. Force is not yang and form is not female. Formation represents the ideas and archetypes that form our creation. Formation represents the energy we use to accomplish our goals. In the new energy, force and formation work in concert and in balance. Too much formation slows creation down, while too much force threatens to spin things out of control.

To properly exit the old energies,

Dear one
This is the lesson,
This is the jest.
Many will study,
You won’t  pass “the test.”

In rage you will struggle,
But have not the strength.
Like many you’ll fail,
Cannot hold out for length.

Defer in our Churches
And lay down your mind.
The Veil we won’t  lift
And The Law will still bind.

Play your part in our show.
Keep your yin way down low.
Accept duality there.
And pretend it’s all fair.

In rage they will struggle,
But have not the strength.
So many will fall,
Cannot hold out for length.

Defer in our Temple
And lay down your mind.
The Veil we shall lift
And The Law no more bind.

Play your part in our show.
Kee your yin way down low.
Accept duality there.
And your life we shall spare

A choice you have here,
Between hatred and sin,
And the love that is deep within
To begin.

But a dragon before you,
A fear in your mind,
Keeps you panicked and sweaty,
Always turning aside.

So what will you do?
And where is the key?
Will you ever step forward,
And divinity see?

Yes my dear, you may come.
Please step forward, don’t run.
It is time, don’t you see?
That you picked up the key.

It is time. Hear the chime?
See the depth in this rhyme?
Hear the message that’s here?
It’s for you. Give a cheer!

So now please listen up.
To light top chakra up,
It’s easy as air,
If you treat all life fair.

Feel the energy there?
As it tickles your hair?
Fill up Isis’s cup!
Fastest way to wake up.

Additional content is available to LP members only. To get the full message, become a member, register and login.
Login
Back to Login | Register